There are numerous car salesman jobs to be had, but you should know that not all salesman jobs are created equal. Overall we know that the profession requires the employee to sell automobiles, but there are many other aspects of the available jobs in car sales to consider. Some of these vacancies to be filled are for selling new cars, others only sell used cars and some allow the car salesman to sell both new and used vehicles. Not to mention the variety of duties, salesperson requirements and of course the details of the car salesman salary. Lets take a closer look at these car sales jobs and discover some of the finer points that can help the potential car salesman make an informed decision about this often scorned, but potentially very lucrative position.

When we talk about being a car salesman there are some basic differences when it comes to the actual tasks to be performed. These differences can have an impact on job satisfaction and potential income. Car salesman job openings come in different formats and structures, as you will see from the details below.

Used car salesman jobs are typically at used car only dealerships or large new car dealers that operate their used car department as a separate division of the dealership. When this is the case the car salesman only has the ability to show, demonstrate and sell used cars. Whether this is a good or bad thing depends on the variety of inventory that the dealership has in stock. Limited inventory often means limited car salesman earning potential. A large used car inventory can be beneficial for the car salesman and allow them to sell to a variety of used car buyers and hopefully make a respectable income depending on the pay plan and whether they pay a commission, per car or a weekly salary.

New car only car salesman jobs are often seen at large new car dealerships that sell a large volume of vehicles every month. They operate separate new and used car departments and require their sales people to specialize. However if you have a new car customer that decides to purchase a used car rather than a new car the salesman has to hand over their customer to different sales associate. A new car sales job can have some benefits such as manufacturer bonuses and spiffs, which can be a nice addition to their car salesman salary. Once again the pay scale and structure will determine the potential earnings, which should be laid out in the car salesman job description and pay plan.

My personal favorite is the new and used car salesman position because of the variety of product available to the car salesman. This means more inventory, a practically unlimited range of prices and choices and finance options. Sometimes the car salesman will switch a customer to a new or used car in order to make a deal and having that availability is often the key to becoming a top car salesman. Typically this sales job pays the salesperson on a commission basis, but not always so check out the salary page for more information.

This car salesman job has been growing in popularity because of the Internet and the way car buyers shop for cars. The Internet car salesman will not work with customers that walk onto the car lot, they only work with customers that come to the dealership via the Internet. This position will keep you busy because you will be working sales leads, emailing customers, preparing quotes, making phone calls and setting appointments. When your customers come to the dealership they will be your customers and you will have the first chance to sell them a car. This job has a six figure income potential depending upon the pay plan and method of compensation. 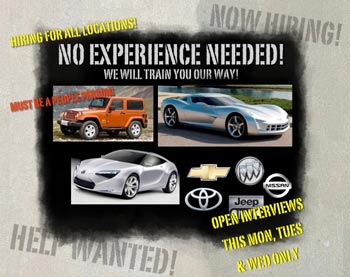 system. Any type of sales or retail experience can be helpful, but selling cars is not like any other sales profession. There are some dealerships that only want to hire experienced salesmen. These dealerships are usually high line dealerships that handle brands like Lexus, BMW and Mercedes Benz. When that’s the case the dealership will often require 2 years of car sales experience or more. If a person has been gainfully employed as a car salesman for 2 straight years they are probably decent salespeople and know how to sell cars. Then the dealership will refine their sales skills to fit their brand and dealership environment.

For most jobs that have the earning potential of a six figure income a college degree is required, but not for the car salesman. Typically the education requirement for a car salesman job is a high school diploma. However car dealers that are hiring new salesmen rarely enforce that requirement. If you can read, write and communicate effectively you will probably meet the education necessities.

Beside the experience and education requirements for car sales jobs a valid drivers license is a must. You can’t go for a test drive without a license. Some dealers will screen your drivers’ license through their insurance company before they will allow you to work as a salesman. Some of the larger dealerships will also require a drug test to make sure they aren’t hiring a person with a drug problem. Once you can meet these requirements the only thing left would be a neat and professional appearance. They will want to make sure that you will make a good first impression when you approach potential car buyers at the dealership.

Car dealerships will usually place advertisements in local papers and online job sources when they have car salesman job vacancies to fill. Depending on 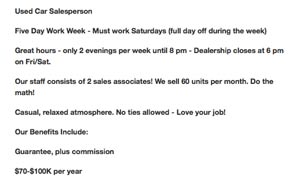 the dealer, the budget and the area where they are located will often determine where available positions are posted. Some dealerships do nothing more than place a sign at the dealership or on the employment page of their website saying car salesman needed. Other dealerships will use online job banks, LinkedIn, Facebook and others. Larger dealers take the car salesman hiring very seriously and will spare no expense to attract qualified applicants.Here are some links of online sources for you to search for car salesman jobs. Once you decide on a dealership you may need to submit a resume, but this is not always needed. Then you will have to go through an application and interview process. During the interview you will rarely know if you are hired on the spot, but typically you will receive a phone call a day or two after all the interviews are completed.

I get emails from time to time asking questions about car salesman jobs and the two most common questions I am asked are shown below. To say you some time you can find my answers right here.

From Automobile Salesman Job to a Successful Car Salesman Career

Many people accept car salesman jobs, but only a small percentage turns it into a professional car salesman career. I have seen many people come and go through the years, but what bothers me the most is the number people that didn’t push through the first 90 days before they gave up and quit their car sales job. The first 90 days is the toughest, but it’s not that bad. Don’t judge a car sales occupation based on the first 90 days, because it just gets easier. There is a learning curve and it takes at least that long to see how bright the future can be and the incredible potential that this profession has to offer. You can do it, others have and you can too!