Sell More Cars with Be Backs

We all joke about Be Backs, but you can sell more cars when you work the ones that don’t buy from you. I am not saying that you should buy their story about coming back because they are usually just looking for away to get out. However research shows that very few sales people, somewhere fewer than 10% actually follow up on their customers after they leave the dealership. The bar is not set very high when it comes to chasing Be Backs which can help you make a difference in your monthly car count. 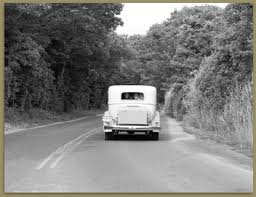 I have talked to many people over the years that bought cars and most of them said that the sales people from other dealerships never or rarely called them to follow up after their visit. They said that they assumed that the salesperson didn’t care if they bought a car or not once they left the dealership. I have noticed that there has been a trend over the last few years that more sales people are following up with their Be Backs, but it is not significantly higher than it was. So why did these people come back to buy a car? Because the salesman followed up with them and seemed to be genuinely interested in helping them purchase a vehicle. The net result is that the car salesman that is following up is selling more cars than their counterparts.

Be Backs are Buying Cars

Very few people come to a dealership to spend an hour or two with a car salesman unless they are going to buy a car. It doesn’t take more than a couple of minutes to follow up with your Unsolds via the telephone or email, but if you want to sell more cars you better start making some calls with the people that you didn’t sell yesterday. Granted you will learn that many of them bought cars after they left your dealership, but not all of them. When you follow up with a customer from yesterday that you weren’t able to close they might tell you they bought already, they changed their mind and they are going wait or they will be pleasantly surprised that you cared enough to call or email.

The people that you talk to that give you excuses like they bought already or that they are waiting don’t want to talk to you for some reason or another, but the ones that will talk to you and tell you what is going on can be your ticket to your next sale. So the next order of business is to get them to return to your dealership. However you need to give them a good reason to come back. The reason needs to be compelling, or informative so they have a reason to return that benefits them. It could be to have another look at their trade-in, new incentives or you believe that you can get closer to their price (don’t make any promises on the phone and check with your Sales Manager first) or maybe you did some research on the vehicle they were considering and you have the answers to the questions they had while they were there earlier.

Be Backs Will Help You Sell More Cars

When a Be Back returns to your dealership the closing ratio is significantly higher than it was on their first visit. In fact most Be Backs sell on their second visit. You have several things on your side when you are able to bring a Be Back back into the showroom. 1. One is that they are ready to make a purchase or they wouldn’t bother. 2. They are getting tired of shopping for a car want to get it over with rather than visit more of your competitors. 3. They know where you were last time on price and trade value so they won’t expect crazy results.

I am not saying that you are going to get a great number of Be Backs to comeback and buy a car from you, in fact the percentage will be quite low. However the time you spend with customers that return to your dealership will be less than the first time and they are very likely to leave with a car. This is a great way to add a few more sales to your monthly car count which will allow to you to sell more vehicles month in and month out and often help your reach a bonus.  Don’t count on Be Backs because we have all been disappointed in the past, but this one easy way to add a couple deals a month and ultimately sell more cars and make more commission.

You can sell more cars too! Get the Car Salesman Book. 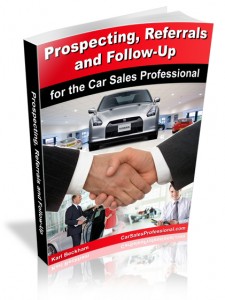