Be a Better Car Salesman

Published by KB on December 2December 2

Can you do a better job as a car salesman? Of course you can. You know that you can be a better car salesman. You know that you could take a few more ups, close a few more deals, get a few more bumps in payment which translates to a little more commission. You know it can be done and you know that you could do that. But we don't always do what we should. Sometimes we have a bad day and start thinking I can't talk to another mooch or another credit criminal that can't pay for a cup of coffee. So then you pass on an up or two and then the guy that took one of those ups sells a car. You could kick yourself. I am sure it has happened to all of us.

Be a Better Auto Salesman the Mindset

A large part of being a better car salesman is your mindset. The way you think makes a real difference when you have a car sales career. I have seen many car sales people loose a customer because they didn't believe their customer was buying a car. Either they thought the customer had bad credit or they thought they were just kicking tires. The car salesman gave up in their mind which turns into outward expressions that the customer picks up and that turns them into a "be back".

The other scenario is that the sales manager goes in and closes the deal because he still believes the customer is there to buy a car. They are determined to sell the car and they do. Yes, sometimes it is the fact that it a sales manager and they know what they can do to sell the car, but more times than not the sales manager has not given up on selling the customer a car. I am sure we have all had this happen to us as an auto sales professional. It is a part of learning how to be a better car salesman, a part that is left out of the standard car sales training.

You Can Be a Better Car Salesman

When you are aware that the above scenario happens regularly you are already getting to be a good car salesman. Pay attention to the way you think when you are dealing with different customers. Start asking yourself questions like, are you giving up too soon, are you sure they have bad credit, are you sure the are just looking. Some people can hide their emotions and intentions better than others. Almost every customer will tell you they are just looking when they come to buy a car. That is their first defense mechanism when it comes to dealing with a car sales professional. If you believe them you are done!!! When you keep on believing that you will sell them a car there is a good chance you will, why else would someone want to come to a car dealership. 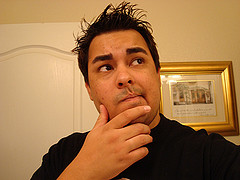 Thinking to Be a Better Car Salesman

How about that one that says "my credit isn't too good". I love these, I have made more money selling cars to people that thought their credit wasn't too good than any other type of customer. We all know how well that can work. It all comes down to how you think when you are working with a potential car buyer. To be a better car salesman you can't give up on selling them a car until all the facts are in (credit report) and all avenues have been exhausted.

To earn a six figure income selling cars you need to control and adjust the way you think. Take the extra up and spend a little more time with them until all possibilities are exhausted. I did not make this a car salesman tip because this issue of how you think has a huge impact, more than a tip on your car salesman income. Go over every Up you had in your mind and analyze every step , even the ones you sell and adjust your thinking accordingly, and you will be a better car salesman.

You can be a Successful Car Salesman....but it is up to YOU......Get The Book and be a better car salesman!

This is true. Once you've 'given up' you stop building love into the car. If they don't love the car then you will not sell a car.