Who Makes the Better Car Salesperson – Man or Woman?

Published by KB on January 8

Take a look out on the showroom floor of any 100-car dealerships around the country and you would probably be lucky to find 75 car saleswomen. What was typically a profession that was once considered suitable only for a man is slowly changing, but it is changing. Ten or fifteen years ago you would have been lucky to find 10 women selling cars for a living at those same dealers and five years from now that number might triple or more. With that said the question that is being asked is who makes a better car salesperson? Is it a man or a woman? Ask an old school veteran and there is no doubt that he will say that a man would be a much better car salesman, but if you ask a woman that has been selling cars for years she will likely say that the woman can be a better car salesperson. So which is it? 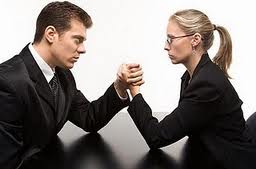 Some people today may say that a woman might have an even better chance of being a top salesperson if she had the experience, but others say that a man is better at negotiating. You didn’t think I would be stupid enough to pick one over the other did you? I have worked with women in the car business that were absolutely remarkable at their job and quite successful that included floor sales, F&I, sales managers, GSMs and GMs and I don’t think there is an answer. I have seen some women that were better than others and I have seen men that couldn’t sell a car if their life depended on it. Although I must admit that I think that a woman with the experience and the determination to succeed could do very well in every department at the dealership.

I really don’t think gender matters when it comes to selling cars professionally. The person is what makes the difference not their sex. Some say that the woman in a family makes the final decision when it comes to purchasing a vehicle so a woman would be a better choice, but I have seen men that can connect with women just as well as any woman. Others say that if the man is dead set against the purchase his other half won’t need to make the decision to buy.  However not every customer is a couple. Buying a car is not a job best done by a man today like it was yesterday. I have sold cars to many women that were much tougher to deal with than most men.

Agree to Disagree on the Best Car Salesperson

This debate could go on forever. There may be pluses and minuses on both sides of the fence, but when it comes right down to it there are many factors and skills that make a top salesperson and I don’t believe that being a man or a woman matters. Whether you are male or female you likely have your own opinions on who would make a better car salesman or car saleswoman, but talk is cheap and the proof is in the results. So lets sell a bunch of cars, have some fun doing it and may the best car salesperson win.

You can make a Six Figure Income Selling Cars No Matter Male or Female - Read the Book!

We hope you get the call too!
Thanks for your kind words.

Thanks for all this great info, KB!! Just interviewed with a big dealership in my area today- never thought I'd go in this direction, but hey, why not? Never thought sales would be my thing. Everything I've read on your blog seems to be eerily similar to what I've had going on in my head all day following my interview (which went really well, at least I think..) and I'm fairly confident I'm going to get that call come Monday. Hopefully, this just shows that I am already equipped with good sales intuition... or perhaps it's just my innate "woman's intuition"... haha
You can be sure that I will be checking back here to learn more! Thanks agian!

Nice job for less than 3 weeks in the business.
Spring and early summer will probably be your best time of year and based on your start you should do well.
An 8 car minimum is fairly common unless there is a good reason, but if you are selling less than eight cars a month consistently you will probably want to change careers.
Switching a customer requires not only telling them why, but also showing them why they should switch. Such as resale, money, payments, depreciation, etc...

I have been a car salesman for 2 1/2 weeks. I have sold 5 cars so far with no car selling experience but lots of other sales experience. What can I expect for the spring? Is an 8 car a month minimum normal? Also how do you flip a person from a sales car to a vehicle with actual gross instead of negative?