I pulled into the dealership the other day in the middle of the afternoon and I saw something that was sure to scare off the average car buyer. It's what I like to call or more importantly what car buyers like to call the "Car Salesman Wolf-pack". In the front of the dealership near the main entrance of the showroom there are 2 groups of sales people, 10 or 12 in all and one group or (pack) on each side of the front doors. It was a beautiful outside and they were getting some fresh air and enjoying the day. 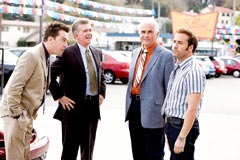 The next thing I saw was the real scary part of the picture. I saw a potential customer pull in the lot and take a look at the pack or group of car salesman that was watching them like a wolf watches their prey and instead of pulling into a parking space and getting out of their car, they drove through the rows of new car inventory and out of the lot on the other side. They didn't even pause to look over some of the cars, they just continued through the lot and off to some other dealership.

Am I being sarcastic? You bet I am. The likely scenario is that the potential car buying customer saw a pack of wolves licking their chops and they would rather not be go through that experience. They saw the classic negative stereotype of the car salesman and they changed their mind. Hopefully they wanted that brand of car and they will be back a little later or another day, but it is more likely that they decided to stop at another dealership and if they run into a professional car salesman rather than a wolf-pack they will buy a car. Oops, there goes another car salesman commission.

When we are talking about car buyers, we are talking about people that believe the worst when they come to the car dealership. So when they see a group car salesmen standing together in plain sight they assume that they will be pounced on by all of them and pressured to buy a car. Except for the boldest of car buyers, most potential customers would rather drive off the lot and go somewhere else than deal with the wolf-pack.

I don't think I need to say it, but I will anyway. Break it up, split up, get away from the door and if you must be in a group take to the back of the dealership where the customers won't see you. A car sales professional does not hang in the pack at the front of the showroom, they are usually out in the lot making note of inventory where they can approach a customer on a one on one basis which most customers prefer (just a car sales tip). This is more about common sense than about car salesman tips, because you know that the car salesman and car saleswoman wolf-pack is not the dealership's welcoming committee, but rather car sales people waiting for a fresh up so they can increase their car salesman income.

Are you waiting to Read the Book or is a Six Figure Income Selling Cars not Important?

I admit it does make them resort to follow up and prospecting as opposed to burning through "ups." It's the contest to get to the consumer first that makes them feel like a piece of meat.

Thanks for your input.

I am not a big fan of the rotation system because I feel that the most driven and aggressive sales people stifled.

The "pack" is a function of the dealership culture. Stores that use a "rotation system" don't have this problem. Stores that run on the values of teenage boys, are steeped in sports analogy and penis measuring exercises. It all starts on the dealer/owner level.