Can You Create Urgency for Selling Cars?

Published by KB on April 20April 20

If you are going to be a top car salesman you need to be able to create urgency for selling cars. Many consumers are conditioned to make a purchase when they are motivated by fear. The fear of losing something like a cost savings or the possible loss of a desired color can be enough to make your customer buy now rather than later. This basic car salesman skill is often incorporated into most car sales training programs and talked about in sales meetings, but this car sales technique requires timing and rapport if it’s going to work properly.

However, many car salespeople try to create urgency for selling cars in a way that makes them sound cheesy or desperate and that is why some consumers call us sleazy car salesmen. I have seen car salesmen and even sales managers telling customers as they are walking out the showroom door that “this car will be gone tomorrow” or “ the price will be higher tomorrow” in a last ditch effort to make a sale, but it does little more than convince the prospective car buyer that they have come to the wrong dealership.

Creating urgency for selling cars this way might work less 1% of the time, but I don’t like those odds and it certainly won’t pay the bills. Most car dealerships and salesmen use the expiration date of the automakers incentives to create urgency for selling cars, but it’s hard to sell a car with urgency in the first part of the month when incentives are valid through the end of the month. Basically all you have done is told your customer that they can shop around for the best deal because they have all month to make a decision.

We have all had those customers that say they are not buying today. They say that they just started shopping and they want to look around because they have plenty of time and that they don’t need to buy a car right now. Remember, those words are just code for we haven’t ran across a car sales professional yet and/or we haven’t been given a reason to buy today. That means that they want you to create urgency for selling cars and sell them a car. They came to your car dealership because they want to buy a car so give them a reason and they will buy a car today.

I have sold more of these “Not Buying Today” customers than I could possibly remember by creating urgency and you can too! The next time you get one of those customers consider it a challenge and assume the sale. Assume that they are buying today and you are going to be the one to sell them a car. Don’t think that you have a another time waster or tire kicker, but rather that you have a solid buyer in front of you because they probably are if do your job in the same manor that you would if you knew they were buying today. Create urgency for selling cars and you will be thanking them for their business in the delivery lane when tell you they didn’t plan on buying today.

How to Create Urgency for Selling Cars

Once you know the car they want you will tell them that you will pull one up for them to take a closer look. You will also say “you know right where they are because you have sold several of them recently”. When they tell you a specific color they like you say “let me think, I believe there is a (red or whatever color) one left”. You are creating urgency in their mind and letting them know that they are going fast.

Throughout your test drive and your negotiations make statements about how well they are selling, how they have been harder to get lately, that production is running behind and others to create urgency that sells cars. Tell them about specific customers that bought the same car recently and how well they liked the car. People like to know that they are making the right choice and being popular makes them feel that way. Now combine that with urgency and you have a deal.

If you talk about incentives don’t threaten them with a deadline for incentives because they probably already know when they end or if they went to another dealership that was used to create urgency for selling cars unsuccessfully. Manufacturer incentives are available at all dealerships so they are rarely a great tool to create a need to buy now unless it’s the last day or two of the program.

Contests: Our dealership is in a contest to win a trip so our General Sales Manager has been doing crazy things to win. 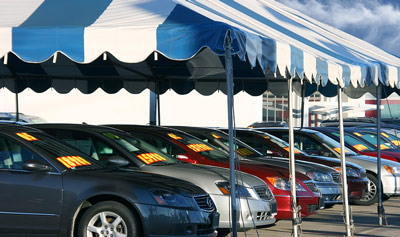 Allocation: If we sell (XX) number of cars during this period we will earn more cars to sell and we have been pulling out all the stops to sell (XX) cars.

Big Sale: We are having our (annual, Spring, Summer, Tent, Fall, Clearance or whatever sale) and we are making great deals, etc.

Giveaways: We are including (oil changes, car washes, floor mats, extended warranties or whatever) with all new cars sold until xx-xx-xxx.

Creating Urgency Does Not Work on Everyone

There is one rule when it comes to selling cars for a living and that is nothing works all the time. However, when you create urgency for selling cars properly you will sell more cars and be a car sales consultant that makes more money and earns more referrals than a desperate and sleazy car salesman. You won’t have to worry about car buyers asking for your business card and promising to Be-Back because we know they won’t.

Later Fresh Up on the Lot
KB