The Car Salesman Needs to Just Say No

We all know that the car buyer is always going to try you on, meaning that they will push, negotiate and lie in order to get more for their money when they buy a car. Not that you can blame them because you would do the same thing if you thought you could get a better price or more for your money. They will tell the car salesman that another dealer has given them a better price on a new car or that another dealer has the same used car with the same miles for a lower price. The car salesman's first inclination is to believe them, but they would be making a big mistake. 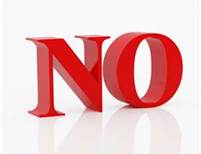 The car salesman is often seen as an adversary and the car buyer wants to feel that they have the upper hand in any negotiation. Therefore they will use anything that they can think of to get a better deal and price is usually that thing. When you ask them for a copy of that price quote they usually won't have it and they will tell you they forget it or some other lame excuse. Most times they do not have that price or the quote they said they got as part of their negotiation strategy and whatever the lie or situation, sometimes as the car salesman you just have to look them in the eye and say NO.

Sometimes the Car Salesman Needs to Say No

Sometimes saying No is bit like bluffing in a high stakes poker game. If you tell them NO in a way that insults them or at the wrong time and you just created a Be Back that won't be back. However if the car salesman tells them NO in the right way and at the right time you have overcome the price issue and now they want something else thrown in or added on. It might be floor mats, remote start or paint protection, whatever it is they will keep trying. When we are talking about a new car, saying No must be done more delicately than on a used car because a new car is more of a commodity and you need to add value to doing business with you as their auto salesperson and your dealership along with the car.

Usually it's much easier for the car salesman to know when to say No when you are talking about a used car because they are at your dealership and they are talking to you. They want that car or they would be at the other dealership that has the used car that is cheaper than yours talking to their car salesman, but they are not. They just want to feel that they are getting a good deal, but when you say no while looking in their eyes with conviction they will accept No and move on to anything else that they think is negotiable.

Remember, saying NO is a gamble so you better know what you are doing and how you are saying NO. It is a very fine line when it comes to knowing when the customer is bluffing and when they are trying you on. There are only two outcomes, one is that you sell a car, get a car salesman commission and the other is that you lost a deal. Knowing when and how is one of the ways to boost your car salesman income. So who is the car salesman here? Are they selling you or are you selling them?

Did you read the car sales book?  Want to sell more cars and make more money ? Maybe you should Read the Book.